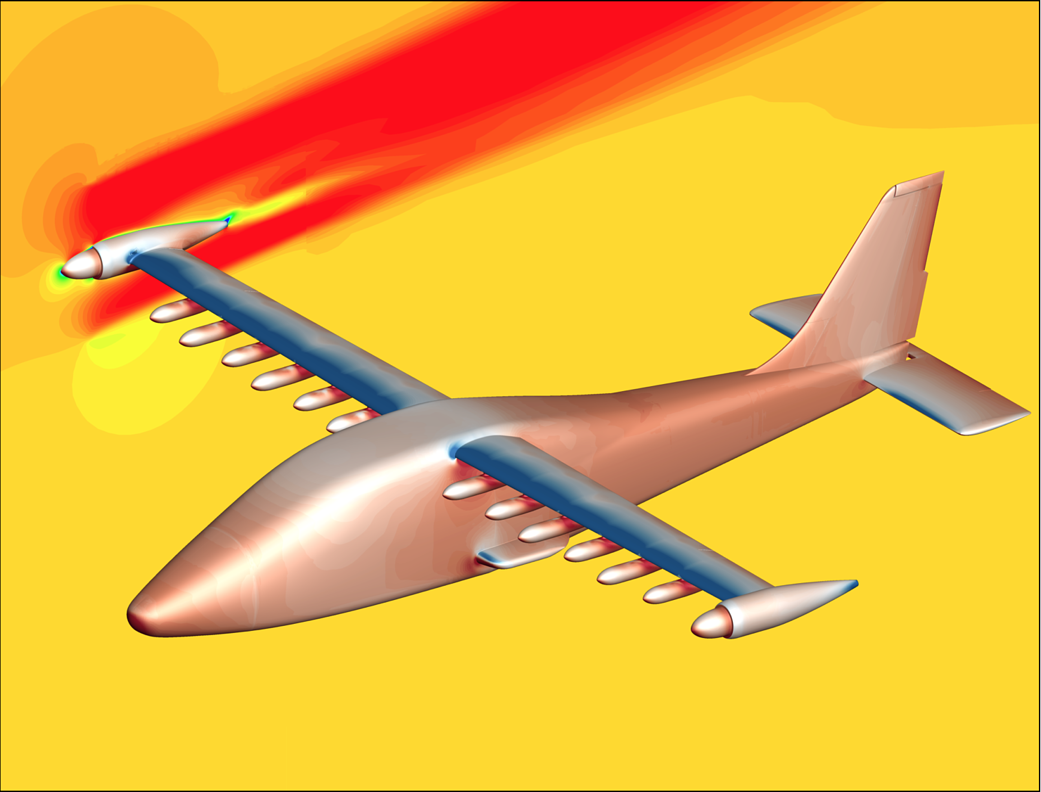 Joining in a growing trend, NASA recently revealed its plans for a zero-emissions, all-electric aircraft – the X-57.
After all, it is the National Aeronautics and Space Administration. Aviation and aeronautics is as much a part of its mission as space travel.
This visualiszation is generated from a supercomputer simulation of the X-57 “Maxwell” electric experimental aircraft. Just as electric cars are becoming more and more commonplace on our roads each day, aerospace engineers are seeking to make electric air transportation a reality.
In pursuit of that goal, NASA is developing its first crewed X-plane in more than 20 years. Compared with conventional aircraft, the X-57 team has set a goal of using five times less energy and – if powered by electricity generated from renewable sources – producing zero inflight carbon emissions.
The X-57’s unique propulsion system, in its final configuration, features 14 battery-powered electric motors and propellers: 12 to provide lift during take-off and landing, and one at the tip of each wing to provide forward thrust during flight.
In order to understand the aerodynamic effects of this design, a team of engineers from three NASA centres – Ames Research Center in California’s Silicon Valley, Langley Research Center in Hampton, Virginia, and Armstrong Flight Research Center in Edwards, California – is using supercomputers to simulate flight conditions for the X-57.
The moment simulated here is from the cruise phase of flight, with pressure shown on the aircraft surface (maroon: high pressure, dark blue: low pressure) and streamwise velocity, or the speed and direction of air flowing toward the aircraft, near the X-57’s rightmost propeller (top left of image; red: high velocity, green/blue: lower velocities).
These simulations help the team analyse the aircraft’s stability and its ability to stay in flight and change direction and will also allow them to create an accurate computer model of aerodynamic performance to incorporate into the X-57 flight simulator.
By accurately predicting the impacts of the X-57’s propulsion system, the aerodynamic model ensures that its flight simulator performs in a manner consistent with actual flight and lets pilots test emergency scenarios and safe recovery measures. Run on the Pleiades supercomputer at the NASA Advanced Supercomputing facility at Ames, the simulations are helping take the next step toward a cleaner way to fly.
Article courtesy of Airlinerwatch
NASA
0 comment
0
Facebook LinkedIn Twitter Google + Pinterest

Airlines got passengers comfortable about flying again once before, can they do it again?