The first COVID-free trans-Atlantic flight has landed in London after all passengers and crew were tested before boarding, sparking calls for the UK to alter its quarantine requirements for US international arrivals.

The United Airlines flight from Newark Liberty International Airport landed at Heathrow just before 7am on Tuesday morning, however all 36 passengers must still self-isolate for 14 days despite testing negative.

One passenger tested positive after taking the rapid Abbott ID Now COVID-19 test before boarding and was forced to remain in America.

The United Airlines service will run for the next month in the hope that the UK and US will axe quarantine rules for people using it.

Anyone over the age of two must have a test in one of United’s converted business lounges to board the plane – and if someone refuses or tests positive they are stopped from flying and rebooked.

The airline has converted its United Club near gate C93 into an onsite testing facility, with the intention of every passenger receiving their results before the flight takes off.

Currently, Americans must quarantine for 14 days when travelling to the UK as the US is still considered a ‘red country’ and they are mostly unable to travel to EU countries.

The US, meanwhile, has banned travellers from Europe unless they are American citizens, have permanent residence in the states, or are given a special exemption.

The test will continue to be used with passengers travelling on United Flight 14, departing at 7:15 pm, Mondays, Wednesdays, and Fridays for the next four weeks.

Customers booking these flights will have the option to confirm their willingness to participate in the trial or be accommodated on another flight.

Customers who opt-in will receive information prior to travel in order to schedule a testing appointment at least three hours before their flight departs from the airport in New Jersey. 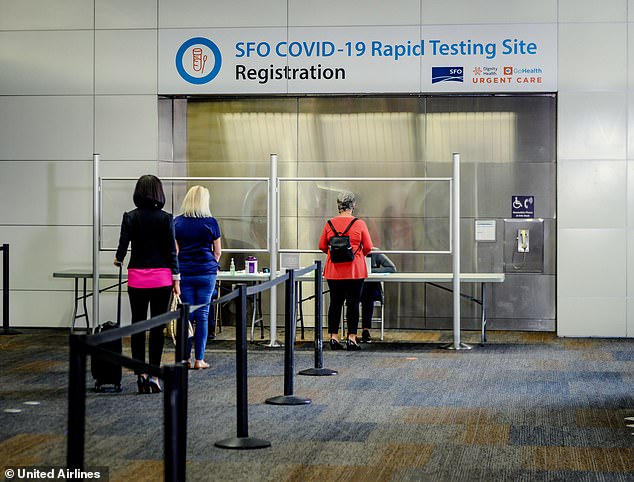 All customers are still subject to current UK entry requirements, including the 14-day quarantine rule.

Josh Earnest, United Airlines chief communication officer, said, ‘The benefit right now is that people – for free – can have the peace of mind knowing when they board the plane that everyone else who’s on that plane has recently tested negative for COVID-19.”

Customers who test positive for COVID-19 at Newark – one of the major airports for New York – will be isolated and advised to contact their local healthcare provider.

United will then re-accommodate a customer once they test negative and are no longer symptomatic.

Transport Secretary Grant Shapps and the Prime Minister are under growing pressure from business leaders and the aviation industry to reopen the route.

The London to New York route is one of the busiest in the world and is one of the most profitable journeys for airlines such as Virgin Atlantic and British Airways.

It comes as Heathrow recently lost its status as Europe’s busiest airport – being overtaken by Paris Charles de Gaulle.

The hope is that by sharing the trial’s findings, it will convince the UK and US governments to give a travel corridor the green light.

It also comes amid reports travel quarantine is to be cut from two weeks to one under plans to get Britain flying again.

A task force set up by ministers has concluded that increased use of COVID testing could allow the current 14-day restriction to be slashed next month.

The group’s report, expected to be approved by the government, has recommended travellers returning from virus hotspots should be asked to quarantine for five days before being tested.

Provided the test is negative, they would then be released from self-isolation two days later. The strategy could be in place before Christmas.

However, experts say this will still deter some businessmen and women, many of whom travel on more profitable business-class tickets.

In regard to the UK’s own pilot scheme – an industry group is drawing up plans for passengers to be tested 72 hours before flying, with a second test on arrival.

Earlier this week, the boss of Heathrow Airport slammed a “lack of government action” to help Britain’s struggling aviation industry after figures showed a “catastrophic” 82 per cent fall in passenger numbers last month.

It comes against a backdrop of a series of difficulties for airlines and airports during the pandemic, which has seen canceled flights and thousands of job losses.